Get Rich Quick: The Cautionary Tale of LuLaRoe 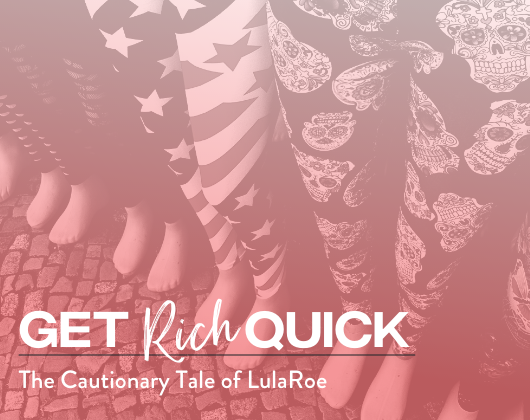 I’d like to veer a bit outside our usual discussions about practical finance tips and strategies to talk about a very disturbing phenomenon that has been brought to light in the “LuLaRich” documentary series. Like me, you probably had a friend or two on Facebook who dominated your feed for a while with invites to her LuLaRoe group and notifications about flash sales. But in addition to the rapid growth and crash of the legging brand once worth $1.3 billion, this series exposes the kinds of exploitative and frankly abusive tactics that I’ve seen in other multi-level marketing companies (MLMs) and even the coaching industry. If you don’t know exactly how MLMs work or how they differ from pyramid schemes, the documentary has some great visual breakdowns of big concepts!

Watching the husband and wife duo speak at LuLaRoe corporate events set off major alarms for me because the boss babe life they were selling to a specific market of stay-at-home moms was so clearly pandering to their fantasies and manipulating them into making a big investment. That’s what really drove me to speak out in this post: so many women are drawn into the mindset hype, the power of positive thinking, and financial freedom, without fully understanding that the business proposition doesn’t make economic sense.

Though predatory marketing and business practices were definitely a big piece of this mess on par with the infamous Fyre Festival, I was saddened to see that many of the women they preyed on took huge risks that contributed to their own financial demise. To be clear, my intention is not to blame these victims for being taken advantage of, but to start a conversation about the importance of financial literacy and the due diligence it takes to make financial decisions based on our values and best interests.

Here are a few of the red flags to watch out for in opportunities like this and questions you can use to make solid decisions when the stakes are high:

The Promise of Rapid Growth

LuLaRoe was clearly dishonest about how many hours consultants had to work in order to make the kind of money they wanted to make, to take care of their families. That’s on them. But when the lie is too good to be true, it’s so important for you to question those claims with a healthy dose of skepticism. That’s a lot of leggings to move in a short period of time! For both consultants and the family members who took on big roles in the company, it would have been wise to ask: what will my responsibilities look like? Do I have the time or the skills for this?

Spreading yourself too thin, too fast, will cause your business to implode. Every business has growing pains in the beginning, but if we can recognize that this is part of growth, how do we prepare for it? It is not negative or having a bad attitude to admit that you might not be capable of handling the volume of work it would take to meet those lofty sales goals, for whatever reason. No secret formula is going to erase your responsibility as the owner to grow along with your business and make decisions about all of its components.

The Risks You Take

This one is about the women who went deep into credit card debt trying to live up to the image of a LuLaRoe consultant and the ones who did crazy things (selling thousands of dollars worth of breast milk?) to afford the steep initial inventory investment—with an unclear idea of what would happen next. Yes, the company made tons of bad promises, but what about the investment of your lifestyle, your social connections, the yearly company conference with hotel and airfare? It’s a matter of looking out for yourself to ask, what if this doesn’t work out? How quickly do I need to make this money back to not jeopardize the wellbeing of my family? If it takes longer than expected, is this still a good decision?

LuLaRoe was not the first MLM to come and go. Remember Thirty-One gifts? The Pampered Chef? The OGs Tupperware and Mary Kay? These are still around, but do you think any are still raking in the amount of cash they did at first? Every business has startup costs, but it’s the owner’s responsibility to ask: is this who I want to be, or am I getting swept up in someone else’s dream? Does this risk align with my values, and five years down the line, will I still be proud of this decision?

Operating largely on Facebook made it possible, even advantageous, for consultants to create a false sense of scarcity in order to boost sales. There is a difference between a legitimate scarcity, when there’s only a limited amount of product (or patterns) to be sold, and these completely arbitrary time windows for virtual sales: “I’m closing the door and the prices are doubled tomorrow.” “Get your orders in before you lose this chance forever.” For a business based on personal relationships, these messages are very dismissive and cold. Knowing that this is how the game is played, these women definitely had the chance to ask themselves if they really wanted to risk damaging their reputation with family and friends.

From the founder and CEO down to beginning consultants, so many did not have the financial literacy to recognize that the business model did not make economic sense. It turned out that LuLaRoe corporate could not maintain the level of quality they were famous for when the volume of sales increased so dramatically. As inventory started to fly out the doors, it would have been wise for those first consultants to pause and look at sales data to understand what it was telling them and if it was ultimately sustainable. The documentary shows the number of consultants growing by the thousands. With so many $5,000 starter kits being sold, who would be left to sell to?

It’s not always easy to “do your own research” in situations like this, but it only took me a quick search to find this article outlining LuLaRoe’s income disclosure statement: “the average LuLaRoe retailer’s gross profit was $10,073.41 for 2020, while the median gross profit for retailers was $1,444.65. More than half of the retailers earned less than $5,000 that year, with 16.7 percent ending the year with losses between $1 and $4,999. Only 2.9 percent of the retailers earned more than $75,000.” Interviews with corporate-level employees revealed red flags early on: almost all of the ground floor employees were siblings, and the Google sheet they showed lighting up with multiple people editing at one time made my skin crawl. For me, that would have raised questions not only about my job security, but also about the business acumen, security, and infrastructure of the company I had involved myself with.

What this boils down to is that it’s critical to develop a personal financial value system and weigh your options and opportunities as they come along. Most of us don’t get a basic level of financial literacy until we seek it out as an adult, but it’s up to each individual to do so. LuLaRich gave us snapshots of where everyone involved saw all of the red flags in hindsight, from the earliest consultants that worked closely with the founding family and the ones that came along later. It goes to show that just because something worked for someone else does not mean it will necessarily work for you, no matter how bright and motivated you are. When it’s your money, your time, your reputation, and your family’s livelihood on the line, it’s up to you to decide when you “go big or go home” and which pie-in-the-sky promises are worth the trip.